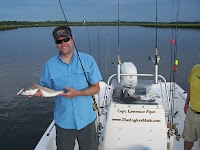 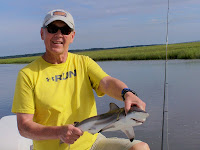 Today was one of those mornings where the conditions just felt right for some topwater action so when Johan Falkman and his father-in-law Warren Philipps met me at the Big Talbot Island Park boat ramp we tied on some imitation mullet topwater lures and headed up to Jackstaff in the Horsehead area to fish the last of an incoming tide.  Johan had just made his 2nd cast with his TFO Tactical Spinning Rod and as he slowly "walked the dog", BOOM!  Fish On!  The big trout smashed the lure and it was instant hookup. Johan played the
fish patiently and we soon netted a nice 18" Seatrout.   We continued to work the flooded oyster beds and had numerous blowups, hits and spits and hooked up with a couple of more Seatrout.   Warren switched to a jig and mud minnowcombo and this did the trick for him as he caught Seatrout, Ladyfish, Flounder,  a small Black Tip Shark and then rounded out his Amelia Island back country Slam with a nice Slot Redfish.  We ran around to Bubblegum Reef and picked up a couple more Seatrout and a couple of Jack Crevalle, then moved down to Spanish Drop where we caught a couple of more Trout and a keeper sized Flounder then we made our final stop back in Jackstaff where Johan added an even bigger Seatrout (20"), picked up on the bottom on a jig and shrimp.  With that, we called it a day, another great one to be out on Amelia Island waters!