The Maguire family had daughters and son-in-laws and grandkids in visiting their north Jacksonville home so they set up an Amelia Island back country fishing trip on The Anglers Mark this morning.  I met Chuck Maguire, his son in law Cale, Cale's son Quintin and his nephew Ian at the Atlantic Seafood boat ramp at 7am and we headed up river to fish some dock pilings on an incoming tide.  The anglers had just gotten their jigs and mud minnows out when Ian had a strong hookup and his rod bent over double, FISH ON!  This big fish was running so hard I had to take the trolling motor off of anchor and begin to chase it down. 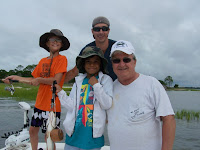 Ian fought the fish for a good while then his uncle took over and continued the battle.  At first I thought it was a shark but it rolled up to the surface a couple of times so then I thought it had to be a huge Redfish.  But it was taking long, long runs so I even questioned that.  Finally, after a 30 minute battle, Cale was able to bring the big beast to the surface and we landed a huge Sting Ray!  Boy what a fish fight!  We returned to fish the spot, had a few bites, but headed on around to outside of Tiger Island.  Here Ian hooked up with a nice Ladyfish, Chuck had a Bluefish then Quintin landed a keeper sized Seatrout.  We had a good flurry of bites and landed a couple of more Trout.  We made our way around to the Tiger logs where we had some good bites.  Cale had a strong hookup and good battle with a nice Redfish that measured just an 1/8" under the legal size and also had a Seatrout that measured just under sized.  As we were preparing to go, Chuck had a good bite and he took landed another nice Redfish.  With that, we called it a day, another great one to be out on Amelia Island waters!
Posted by Anglers Mark at 4:57 PM