Doubled Up and Oversized 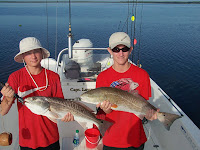 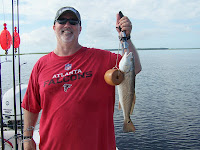 Today was one of those once in a lifetime fishing trips that just makes you wonder, "can this be happening?"   I had met Robert Golden, his son Tanner and their friend Mark down at the Big Talbot Island Park boat ramp this morning and you could see yourself on the water it was so calm and glassy.  We headed up the Nassau River to fish the Horsehead area with just a few hours of an incoming tide.  We held up at a marsh runout and began to fish jigs on the bottom with mud minnows.  The first casts by Tanner and Mark produced a hookup, a feisty Whiting and  a large Sail Cat.  Well that was cool to have fish on the first cast but little did I know that we were in for some serious fish catching.  Both Tanner and Mark began to hookup with oversized Redfish and two or three times they both had one on, FISH ON!  FISH ON!  Their light tackle TFO Signature Tactical Spinning Rods were bent double as one fought a big fish at the bow and one fought a big fish at the stern. They'd pass each other at amidships and continuer their fights at the other end of the boat.    I eventually had to ask each of the young men to keep a tally of how many of these oversized Reds they caught and released and by the end of this amazing day they each had released 4 fish, measuring to 30.5"!   In the middle of the extravaganza Robert was able to put a Slot Red in the boat and Mark added one, too.  After being checked out by the FWC officer, we moved back down the river and the anglers wrapped up the day catching Seatrout, Blues, and Jacks.  With that, we headed in, counting it as a super great day to be fishing Amelia Island waters!