All Around Good Fishing Trip 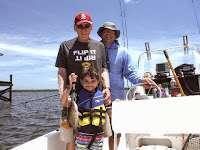 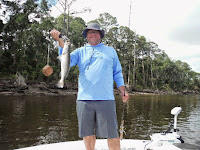 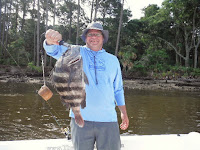 I had a sole angler today - Tim Gula - who met me down at the Sawpit Creek boat ramp. The tide still had a few hours to get to the bottom so we headed up the Amelia River and turned into Jackstaff to fish the exposed oysters with live shrimp and a jig. Tim was an excellent caster and was putting his bait in perfect position but we had no takers along an entire stretch of fishing. But we moved across the creek to fish a sandbar point and found that we could go across the bar, let our jig drift with the current along the bottom and BOOM! Trout On! There was one area where you could almost
count on a bite and we caught a good "mess" of Trout ranging from 13"-15". We decided to move on in search of bigger fish and different variety so we made the run around and down to Broward Island. My "spot" was taken so we fished a little north, had some bites, picked up a small Trout, then drifted north with the tide. Then Tim had a weird bite that took his shrimp softly then, FISH ON! This was a lot bigger fish than what he thought! He played the big fish a patiently, even as it got back in the current, and after a good battle landed a big 20.5" Sheepshead! Boy what a fish! This fish put Tim into third place in the Anglers Mark 2015 Bragging Rights Tournament -Sheepshead caterogy.  Scroll down right side of this report for standings. And just a little later, Tim had another good bite and landed a fat 18.5" Trout. We picked up another couple of Trout then ran back to fish some docks at Seymore's Pointe. After landing another Trout and a keeper sized Mangrove Snapper we ran back to the dock to pick up Tim's son Wyatt and his father in law Dennis for another couple of hours of fishing and boating. We made our first stop at a different dock at Seymore's but the wind was making it difficult to fish so we moved around until we had some shelter. It wasn't long before Wyatt was reeling in a nice Snapper, then another. Later he had a stronger bite and this fish was bending the rod. But Wyatt held on and cranked in a nice feisty Redfish! We fished Jackstaff for a while then headed in, counting it as another great day to be fishing Amelia Island waters!
Posted by Anglers Mark at 7:07 PM