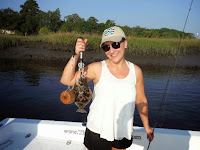 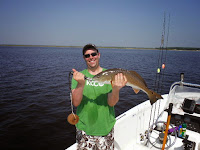 Boy what a pretty day we had today. Sunshine and just a slight breeze greeted us when I met Rachel and Marcus Longcrier and their friends Patrick and Ashley down at the Atlantic Seafood dock. We headed up the Bell River and set up stream from a dock on the last of an outgoing tide and the anglers began tossing live shrimp on a jig up to the pilings. It didn't take long for Rachel to "knock the skunk" off the boat when she landed a keeper sized Seatrout. Marcus followed that up with one of his own and then Rachel
followed that with a keeper sized Flounder. We moved to another dock and Ashley got in on the action when she had a good hookup with a  feisty Redfish, which she landed expertly. Marcus had really strong bite up between some pilings and sure enough, the big fish was having none of coming to the boat, instead, it found its way back into the pilings and broke itself off. OUCH!  I felt sure we'd left a fish back at the original dock and so we circled back and within minutes Marcus had another strong hookup. But it too was a wiley fish and stayed up in the pilings and it too broke it self off. 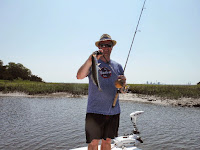 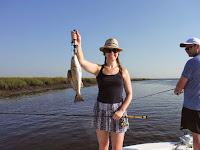 Double OUCH! We may have picked up another Trout or two at these docks but we eventually made our way into Jolley River and stopped to fish the MOA where we had no real bites, although we had a shark siting. Our next stop was Jolley Bank and as we fished we noticed that the tide was at its bottom. We eased along the shoreline, tossing to the exposed oysters, and had no real bites. But we passed the tide line as the water came in so we circled back and
fished a short stretch again and, BOOM! Big Fish On!  I had just commented that this was the same spot that Patrick had caught his "Tournament Redfish" last year and now Marcus had one on! He played the big fish from the oyster bank out to the boat and back to the oyster bank and then from port to starboard across the stern and soon landed a big 26 1/2"  Tournament Redfish of his own! Later he followed that up with a nice feisty Redfish. We continued on around to fish Tiger Island where the anglers had some good bites but it took Patrick to put the final touch on the trip when he caught a nice Seatrout. With that, we called it a day, another great one to be fishing here at Amelia Island, Florida.,

Thanks to the writer of this article. I appreciate your effort in making this informational blogs. I know it's not easy to do this but you have done a really great job. Congrats. I'm pretty sure your readers enjoying it a lots.