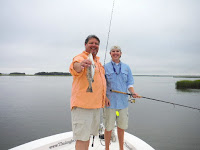 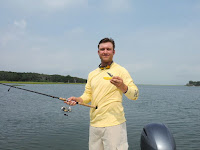 We luckily had an overcast day today because there was very little breeze, but it made for a great day to be out in the backwater. I fished with Greg Adams and his son Chris, along with Greg's workmate Kent and his son Sam., meeting them down at the City boat ramp. We made a run up into Lanceford Creek, fished some docks, and Chris knocked the skunk off with a hungry Seatrout catch. But that was all we got so we swung by some flooding oyster beds on the incoming tide and switched to float rigs. Here, the
action picked up with the anglers picking up a handful of Seatrout, a small Flounder and a "cigar fish".  We ran around through Tiger Basin and up to the Jolley River and again picked up a Trout or two and some Blue fish. Running further up the Jolley we found more Trout and Blues. Our last stop was back to Tiger, right at the peak of the high tide, and the fish catching was fast and furious - Trout and Blues and Trout and Blues. Kent put a "almost keeper sized one in the boat", then Chris followed that up with what surely was a keeper but the net man bumped him off! Then Sam followed that with a keeper sized Trout of his own. We fished until the bait well went dry then called it a day, another great one to be fishing Amelia Island waters.
Posted by Anglers Mark at 3:17 PM

What kinda bait u using for the trout?

Richard,
I've switched to mud minnows almost exclusively. The live shrimp get pecked off by "baitstealers" so much, and they die too easily with the hot water. We're catching Trout, Reds, and Flounder on the minnows.