Windy? Not a Problem! 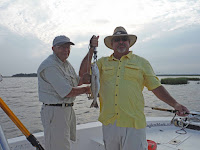 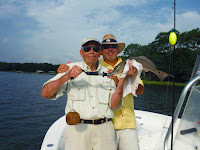 A windy morning today was a little bit unusual for this time of year but it didn't hold this father and son fishing team back! I had met John Alexander and is dad Al down at the City marina and we headed up the Bell River to fish some flooded oyster beds with float rigs and live shrimp and minnows. John kicked things off when he landed a hungry Seatrout then he put a nice keeper sized one in the boat. Al was not to be outdone and he too caught a couple of Trout. We moved around to Lanceford Creek and fished a grass patch and
although the fish catching was not outstanding in quantity, it stood out in quality! Al had tossed  his bait up near the grass and when his float slowly went under - a tail-tail sign of a Redfish - he gently raised his rod, and FISH ON! You could tell Al's many years of fishing was paying off because he played the big fish perfectly and soon landed a nice 23" Slot Redfish! We fished the area thoroughly and had no more bites until Al's float again disappeared (in almost the same spot). I was thinking another Red but when Al worked him to the boat we saw it was a keeper sized Flounder, rounding out his personal Amelia Island Back Country Slam. We fished some docks at Lanceford, had a bite or two, then hit another dock at Oyster Bay where Al picked up one more Trout. After that, we called it a day, another great one to be fishing Amelia Island waters.
Posted by Anglers Mark at 4:25 PM