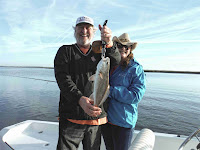 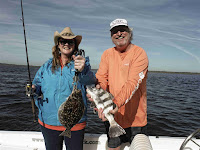 ...and Ham Samiches! We're being blessed with May weather in January this year and today was no different. I met longtime clients Dale and Kay Bullard down at the south end boat ramp and as always, they brought along a third helping of their famous Ham Samiches! Boy are they good. There made with the motto, "keep it simple" - plain white bread, premium Honey Baked Ham slices, mayonnaise, and Velveeta Cheese slices. But before snacking, we made the run up the Nassau River and with the tide hitting bottom,
we made our first stop at Bubblegum Reef. I haven't been having any luck here in the last few months but the tide was right and I just had to try it out. No real bites, other than a "baitstealer" that Kay expertly caught. We moved up the river to fish some dock pilings and sure enough, there were fish. Kay "knocked the skunk off" when she landed a hard fighting Black "puppy" Drum then both anglers put a few Redfish in the boat. We had one big fish hooked up but it was smart enough to wrap itself around a piling and, Fish Off.  We bounced up and down the docks and landed a few more feisty Redfish then ran down to Broward Island to fish the first of the incoming tide. The two anglers had a good flurry of fish catching, landing a few Redfish then Dale began to pickup some hungry Seatrout out deep to give them a Slam. He landed a nice keeper sized Black Drum and while he was working it to the boat Kay had a strange bite and hookup. She brought hers in just a minute after Dale's and we netted a keeper sized Flounder, giving the couple an Amelia Island Back Country Grande Slam of Redfish, Black Drum Seatrout and Flounder. We worked up and down the bank and wrapped it up with Dale landing a good handful of Seatrout, caught out deep. With that, we called it a day, another great one to be fishing here at Amelia Island, Florida.
Posted by Anglers Mark at 6:34 PM