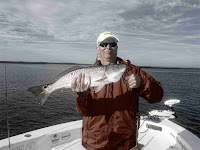 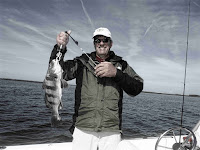 My first trip back to "work" after the New Year was one of those banner days of fish catching! I had met Chris Niewold and his long time fishing buddy John up at the Dee Dee Bartels Park and boat ramp and we had motored over to the Bell River to fish the first of an incoming tide with jigs and live shrimp. Wouldn't you know, the "demo cast" produced a nibble and so I quickly handed it off to John, who gave it a second, then set the hook, and FISH ON! And it was a big one, to!  John played it patiently as it ripped drag and dove deep- he kept the pressure on and let the rod do the work and
after a good battle landed a nice 24" Slot Redfish. First Cast. Big Fish. Now that's the way to start the day! Then both anglers were getting bites. We moved up and down the bank and it wasn't unusual for the to have a "double" going. Chris had stayed with a spot and he too had a strong hookup. His fish was pulling drag but wanted to stay deep and sure enough, after hard fought battle, Chris landed a big 20" Black "puppy" Drum. We caught fish for 3 hours, landing a whole herd of small "feisty" Redfish, with a couple of Slot sized one's to go along with those. They caught a good handful of the Black Drum, with four of them being of keeper size, and Chris found that he could fish deep along the channel edge and pick up keeper sized Seatrout, the biggest being 19.5" - a nice fish. Being that it was such a great day, they both deserve to claim Anglers Mark 2017 Bragging Rights for biggest fish caught, even if it was the first trip of the year! (Scroll down right side of this report for standings). It was a great way to kick off 2017 fishing here at Amelia Island, Florida.
Posted by Anglers Mark at 5:50 PM