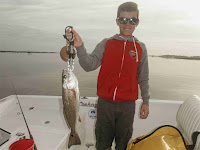 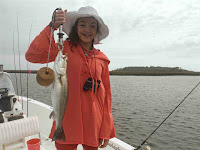 We had a nice morning today, albeit somewhat "buggy" with the sand gnats present. I met Andy and Gracie Wakeford along with their kids Victoria and Christian up at the north end boat ramp and we made run over and up Eagans Creek with plans to fish the flooded marsh grass on the very first of an outgoing tide. All four anglers were tossing live shrimp under floats and making excellent casts but we had absolutely zero takers. However, the gnats were having a field day at our expense. But these anglers were game and at our next stop at some docks pilings we began to get some fish.
Christian started off when he hooked up with a  nice fish that was ripping some drag. After playing the fish expertly, he landed a nice 19" Slot sized Redfish. Victoria picked up hungry Trout, Gracie added one, too. Then Andy hooked up. This fish was big too and wanted to get back in the pilings but Andy hauled him out and worked him to the boat, another 19" Slot Red. We continued to fish, picked up a keeper sized Trout, then it was Victoria's turn at a big Red. She fought it valiantly and after a good battle landed the biggest one of the morning, a nice 21" Redfish. When the bite slowed we made the long run around to the Jolley River and began fishing a deep bend with slip floats and live shrimp. By this time the breeze had picked up and blown the gnats away. Although the bite was slow, the ones we caught were big! Andy had his float disappear and after patiently working it to the boat, he landed a nice 21" Seatrout. And after moving to another dock, Victoria copied him - hers was just a tad over 20"- both nice Trout. We made one more stop back a Tiger Island where Christian got hot catching feisty Black "puppy" Drum and Gracie wrapped thing up when she landed a keeper sized Seatrout using a jig and shrimp fished slowly on the bottom. With that, we called it a day, another great one to be fishing here at Amelia Island, Florida.
Posted by Anglers Mark at 6:12 PM