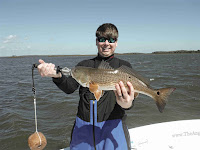 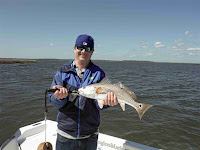 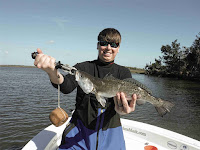 The wind was forecast to be 17-19mph today, and they were accurate! But with a game plan to try and stay out of it, I met Jim Garner and his brother-in-law up at the Dee Dee Bartels park and boat ramp early this morning and we made the short run to Tiger Island with a baitwell of live shrimp and the first of an incoming tide. You know it's going to be a good day when the "demo" cast picks up a fish, which it did! Then the two anglers began to make accurate casts to the pockets and it wasn't long before they were catching fish. They caught a good handful of Seatrout and a small
handful of Redfish. A couple of the Trout were of keeper size and one of the Reds was in the Slot. Then Jim had a strong bite out deep and when it ripped some drag we were thinking Redfish but it turned out to be a nice fat 19" Trout. We caught a few more then picked up another big Trout. Just before we left Jim had another big bite. This one was a Red, a big one, and it ripped line as it dove to the bottom. Jim kept the pressure on and worked it patiently to the boat and....BAP! The big Red made one more dash and it was off to freedom! OUCH!  We picked up and ran through the marsh and
over to Bell River to set up on a flooding oyster bank, with the wind really blowing.  Here, Jim was tossing a jig out from the bow and Greg was working a float rig back near some marsh grass. BOOM! Greg had an nice fish on. The drag ripped, but Greg was up to the task and worked in a nice 22" Slot sized Redfish. He went back to the same spot and BOOM! Redfish. Jim was quickly switching over to the a float rig as Greg went back to the same spot and, BOOM! Redfish. Jim went in with his float and, BOOM! Redfish. Although there were a few undersized fish, there were jus as many Slot sized fish. Jim's next drift picked up another fish and this was a bigger one. He worked it to the boat and landed a nice 24" Slot fish. Both anglers picked up another fish or two then we headed in, counting it as another great day to be fishing here at Amelia Island, Florida.
Posted by Anglers Mark at 7:01 PM