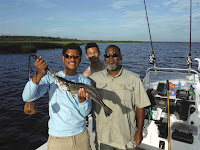 Back to work this morning! We had an outstanding day forecast, slightly overcast and a very light breeze for the morning. I met Wyman Bethea and his two sons Cameron and Corey down at the Big Talbot Island Park boat ramp and we headed up the Nassau River to make a quick stop at some exposed shell beds. The three anglers began making casts (excellent ones, I might add) up to the bank. They were all getting nibbles but it was Wyman who put a
high flying Ladyfish then a feisty Redfish in the boat. And not much else after that! 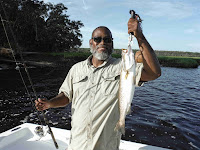 We made the run down to Broward to take advantage of that early incoming tide and this was the trick. After fishing a large marsh run out and getting nibbled a bunch, we dropped back and fished some downed trees. BOOM! Corey had a strong hookup. This was a big fish. He played it perfectly as the drag ripped and soon netted a nice 21.25" Seatrout. Man what a fish! He followed that up with another Trout then his dad went into the hole and BOOM! Big fish on again! Wyman worked the fish patiently to the boat and landed a 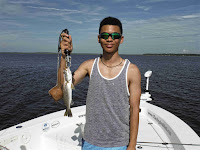 nice 22" Seatrout, a fish that puts him in third place in the Anglers Mark 2017 Bragging Rights Tournament-Seatrout Category (scroll down the right side of this report for standings). We continued to fish the "hot spot" and pulled a couple of more keeper sized Trout of it, and also had some small Mangrove Snapper.  We bounced down the island, fished to no avail, then hit the north end where Wyman caught an "almost legal" Redfish. 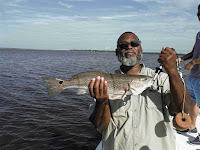 Our next stop was back at Pumpkin Hill. The trio landed a couple of small Reds then the Trout bite got hot again and they landed a couple more keeper sized ones, a nice keeper sized Sandtrout. Cameron had persevered and added a Trout or two and had another Sandtrout right to the boat. We had gotten low on shrimp so we switched to plastic grubs. Finally, Wyman had a strong bite and, FISH ON! He played it perfectly and landed the first Slot Redfish of the day.

We made one last stop of the day back at Seymore's Pointe. Cameron found a "honey hole" for catching nice Croaker then his dad wrapped things up with one more Slot Redfish catch. And with that, we called it a day, another great one to be fishing here at Amelia Island.
Posted by Anglers Mark at 5:33 PM