One Heck of A Hot Spot 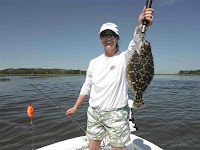 I was lucky to be included today in a "group" fishing trip set up by Capt. Scott Thompson and I had Zach and Elizabeth Powell and their friend Dale on my boat to do some Amelia Island Back Country Fishing. We had a high and still incoming tide so we left the City marina and headed up Bell River to set up alongside some flooded oysters. All three anglers were making excellent casts and although we had a few nibbles, we had no real bites. 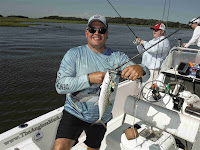 So we ran through the marsh around to the outside of Tiger and the
fish "catching" turned out to be on fire!  They began to hookup with Seatrout after Seatrout then picked up some feisty Redfish then a couple of Jack Crevalle. It was almost non-stop action for a good hour. When it slowed we eased across a creek and BOOM!  Elizabeth picked up the biggest Trout of the day.


We could see a bunch of feeding activity behind us on a pointe of grass so we dropped back and the bite got hotter. We had a number 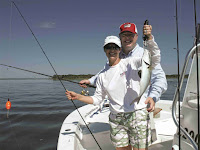 of "double" hook ups and  a couple of "triple" hookups.  Dale was at the stern and drifting his float "to Cumberland" and he was picking up Jacks and Trout. Zach was making pinpoint shots to the point and found a Flounder hole, picking up four in a row, and then Elizabeth followed him in and got one, too.  We let the boat drift back and all three anglers were able to fish beyond the pointe and the catching got even hotter. They landed Trout, Redfish, Flounder, a big Bluefish, Jack Crevalle, and a handful of Spanish Mackerel and had a high flying Ladyfish to the boat. It was crazy.

The feeding frenzy eventually slowed so we made a quick run up to the Jolley River, fished the "bank" and the highlight was when a huge Tarpon lunged at Dale's minnow right at the boat -startling us all! And with that, we called it a day, another great one to be fishing here at Amelia Island, Florida.
Posted by Anglers Mark at 7:40 PM