A Couple of Slot Reds 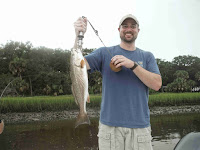 It was muggy this morning but luckily the cloudy skies blocked the sun and we had some pleasant fishing. I met Claiburn Hartigan and his friend Chuck down at the Big Talbot Island Park boat ramp early and we made a short run up the Nassau River on slick water to make our first stop at some exposed oyster beds. Bait was moving and fish were popping and the two anglers picked up a couple of small but feisty Redfish and a Catfish. 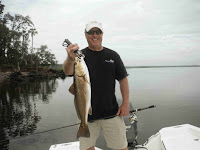 We moved further up the river and again fished some oysters as the tide began to move in. Chuck tangled with another Catfish then Claiburn hooked up and landed a nice keeper sized Trout. Chuck had a good fish on that gave him quite a battle - a Jack Crevalle.  After crossing the river to fish some docks, we pitched to the pilings with jigs and minnows and caught a few small Mangrove Snapper, then a keeper sized one. Then Claiburn had a strong bite and we knew when the drag ripped that this was a good 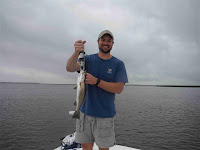 fish. He played it patiently and soon landed a 19.25" Slot sized Redfish.

The tide had been coming in for a while so we ran down to Broward Island and fished the logs. I was a tad bit disappointed on the catch which was Chuck hauling in small Mangrove Snapper one after the other. But as we moved down the island we did pick up one good fish when Chuck hooked up and a expertly landed another 20.5" Slot Redfish.

Our next stop was up at Pumpkin Hill and again, more Mangroves. They did find a couple of feisty Reds and a high flying Ladyfish. After one more stop back at Twin Creeks on the Nassau, we called it a day, another great one to be fishing here at Amelia Island, Florida.
Posted by Anglers Mark at 6:58 PM