Everything But the Ktichen Sink 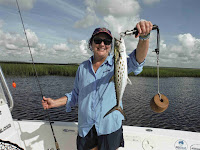 Thank goodness we have great weather these summer days so that we can get all the booked trips in! I met Ivan and Peggy Jaskinia up at the Eagans Creek boat ramp early this morning (after spotting a manatee AND an alligator near my slip) and we headed over to the logs of Tiger to try our luck with mud minnows and jigs on a low and incoming tide. Ivan and  Peggy worked the bank expertly but we had very few bites, one was a large Ladyfish (caught) until Ivan picked up a couple of small but feisty Redfish and a keeper sized Mangrove Snapper.  We fished it thoroughly then headed on, taking 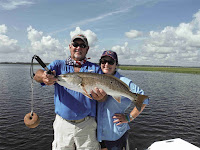 it easy thru the cut to be on the lookout for the ever present Manatee.

We ran up to the Jolley River, turned into the incoming tide and went with float rigs and the minnows. I think we may have picked up one or two Trout along the way and a small Flounder. After running further up the Jolley and fishing  a now flooded marsh line the two anglers began to pick up fish. They had a "double" hookup of hungry Seatrout, one of which was right at 18", a keeper size, and then they had a couple of more Trout. Peggy hooked up, battled, and landed  a rare keeper sized Spanish Mackerel, then she added a hard fighting Bluefish to the catch.

Ivan wad fishing the bank closely and letting his float drift the marsh line with his bail open when it slowly disappeared. He lifted the rod tip slowly, set the hook, and FISH ON! This fish was big and it was so far back I thought surely Ivan would get spooled so we gave chase with the trolling motor and Ivan quickly took in line. Once we got close, Ivan kept the pressure on. The big fish rolled a few times up near the oysters but it was to no avail. After a good battle, Ivan landed a big, oversized 28.75" Redfish, with six spots! Boy what a fish!

We made one last stop out side of Tiger. Peggy caught another keeper sized Seatrout and a Flounder. Ivan added another Flounder, then wrapped things up with a good fight with a Jack Crevalle. And with that, we called it a day, another great one to be fishing here at Amelia Island, Florida.
Posted by Anglers Mark at 5:36 PM