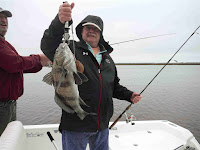 I sure am glad I had that new North Face Tri Season jacket on this morning! Along with a few other layers. I had met Dale Bullard and his brother Danny down at the Sawpit Creek boat ramp and when we ran up the intercoastal I was all zipped up and balakava/knit cap and glove clad - and was very comfortable on that first run which is always a "cool" one. We made that stop in a side creek off of  Jackstaff and with a high and outgoing tide, began to toss live shrimp under some float rigs.

Sports  that seem to be made of denser foam which means they'll hold up better and cast further. They also use a flexible wire similar to the Bomber brand which keeps them from bending out of shape. One small detail that I like is a small washer between the float and bottom brass beads. The Cajun Thunder and Bomber floats don't have the little washer and over a period of time, the beads will "smush" up into the float.) 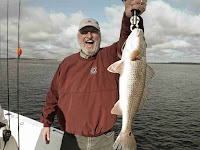 It didn't take long before Dale had put a keeper size Seatrout in the boat, but after fishing that spot and another, we had no more real bites, so we ran through Horsehead and around to some docks at Seymore's Pointe and began fishing jigs and shrimp tossed to the pilings. We had a good flurry of Seatrout catches then Danny seemed to have a bite. I'd of bet money that he had a big 'ole clump of oysters but Danny insisted it was a fish, and a big one! Sure enough, it was just big and wanted to stay on the bottom. Buy Danny worked it up patiently and soon landed a nice 20"+ Black Drum, boy what a fish!  We hit a few more docks, picked up a couple of feisty Redfish, then ran down to Broward Island to fish some logs.

I had hardly gotten the Minnkota on anchor and Danny hadn't even baited up yet as Dale made a good cast forward into the current. He said it had not sunk but a bit when, BOOM! FISH ON! It was a big one, too.  Dale played it perfectly  and as it got back in the current, he kept the pressure on, and after a good  battle, landed a 22.5" Slot sized Redfish. We picked up a couple of more smaller fish, bounced up and down the island, landed another Slot Red, then made one more stop back at some docks at Seymore's to add one more big Black "puppy" Drum to the box. We had to work for them today, but these two anglers made it happen and ended up with a nice mess of fish, so we called it another great day to be fishing here at Amelia Island, Florida.
Posted by Anglers Mark at 5:18 PM