Redfish On Every Cast 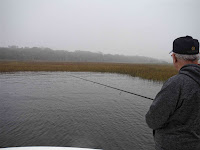 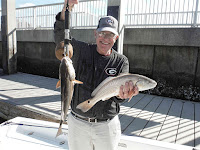 Foggier today than yesterday! When I met Bob Blalock up at the Dee Dee Bartels park I already had my navigation and stern lights on and we crept away from the boat ramp, taking it easy out thru the channel and around to Tiger Island. We eased up to some flooded oysters and began tossing live shrimp under a float with a short leader and....BAM, Redfish on! I think Bob had more stamina than I did and he needed it - he was getting a fish or a bite on every cast! It was crazy. Most of the Redfish were short but as we moved around we began to get into some bigger, 20" Slot sized fish. Two
hours later I looked at my watch and we were still catching fish.  It seemed like when the tide changed and started out was when the fish bite began to slow.

We bounced over and fished a large creek mouth on the first of an outgoing tide, then ran up to the Jolley River to fish a spot that had been hot from yesterday's trip. However, the conditions were a tad bit different and although Bob did put a feisty Black "puppy" Drum in the boat, there wasn't much going on.

We continued on around to the Bell River and set up off from some docks and switched to jigs and shrimp, tossed to the shore line, and fished slowly back. This did the trick. Bob found some fish and put a good handful of Seatrout in the boat. We did find one that was of keeper size. We worked in and out of the docks, caught another Trout or two, then headed in, counting it as another great day to be fishing here at Amelia Island, Florida.
Posted by Anglers Mark at 6:34 PM