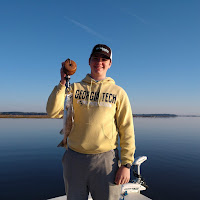 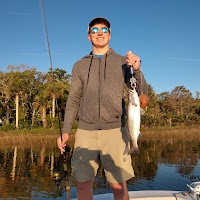 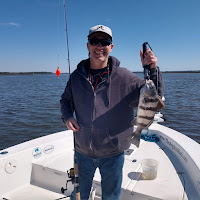 I've fished the last few days and boy were they some pretty ones! I had Allen Harris along with two strapping young guys, fishing out of Sawpit Creek on a high and incoming tide. We fished float rigs with live shrimp up close to the flooding grass and did pretty good catching Trout, a nice Slot Redfish, and a keeper sized 17"  Black "puppy" Drum caught over some oysters. 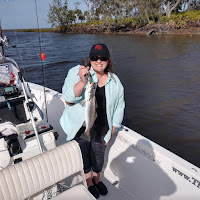 That afternoon I fished with William and Dara Blalock on the
falling tide. The bite was somewhat slow for a bit, although we did catch a Trout or two. After making our way down to Broward Island ( and fish with the Eagles) the outgoing tide slowed to a stop and as it started back in, we began to pick up fish - Seatrout - some of them of keeper size (all released) and a good handful of small but "feisty" Redfish.

Yesterday I fished with Steve Buckley, his son-in-law David, and grandson David, meeting them up 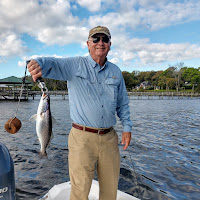 at the Dee Dee Bartels Park boat ramp.  Again, we had that high and incoming tide, and some breeze to go along with it!  We had a good bite here and there, finally found a couple of Seatrout, but it was somewhat slow fishing. I noticed the rivers and creeks were real muddy.  We did find some shelter for a bit and here Steve landed a big Fat female Seatrout (all fish were released today, also).

I keep waiting for the wind to settle down, the water to clear up, and warm up, and then I think we'll see an uptick in some great fishing here at Amelia Island!
Posted by Anglers Mark at 10:26 AM