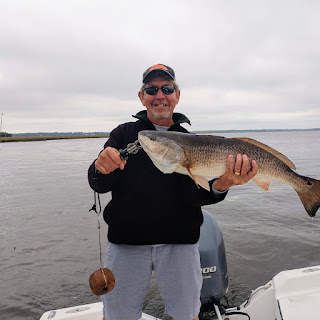 We had a great morning that greeted us when I met Ed Johnson and his buddies Rick and Ken down at the Sawpit Creek boat ramp. We had just slight overcast but temperatures were mild and it made for a comfortable run up the Nassau River with plans to fish some dock pilings at the very last of an outgoing tide. We had "freshly dead" shrimp to bait our jigs with and while Ed and Rick fished the first dock, Ken unlimbered a fly rod and blind cast to some exposed oysters with some beautiful shrimpy flies that he had tide. Although Rick had one strong bite and both he and Ed had nibbles here and there, we didn't get a single fish at the docks at Seymore's Pointe.

It looked like the tide was about to change so we buzzed down to Broward Island and finally, Ed "knocked the skunk off" when he boated a hungry Seatrout. He then picked up an "almost legal" 8 spot Redfish. The tide changed and started back in and about that time I had broken out some beautifully painted jigs that a Minnesota Walleye guy had made and delivered with some of my Minnesota guests, and the fish began to bite. Both Ed and Rick began to catch a Trout and a Red here and there, then Rick put  keeper sized one in the boat. The duo landed a trio of Flounder, two which were of keeper size, then Ed had a good bite, a hookup, and, FISH ON!

None of us thought that it was going to be much of a fish but as it moved from bank to boat and from bow to stern it got stronger and stronger. BIG FISH ON!  There wasn't a whole lot Ed could do with it other than adjust his drag on the light 1000 Shimano Stradic reel and he played it perfectly. This fish was not coming to the surface but Ed was patient, let it run - we chased it a couple of times -worked it to the boat, and eventually landed a big 30.25" oversized Redfish - boy what a fish!  After a photograph it was released to swim away. This fish puts Ed in second place in the Anglers Mark 2019 Bragging Rights Tournament-Redfish Category. Scroll down the right side of this report for standings.

Rick added another Slot Redfish to the box. Ken was making excellent casts with the fly rod but there just weren't any takers for the artificial flies - we tried Ken's shrimp fly's and some Clousers, but to no avail.  The tide got up so we called it  a day, another great one to be fishing here at Amelia Island, Florida.
Posted by Anglers Mark at 9:09 PM