Drum'n up a mess 'o fish 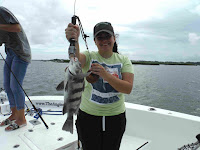 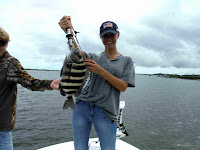 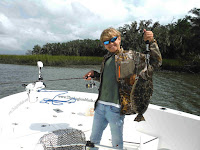 We postponed our trip this morning to 9:30am to let some passing rain storms pass thru. I met Trey Dennard, his friend Maria, her son Mario and their friend Brooke up at the Dee Dee Bartels Park boat ramp. We made the short run over to Eagans Creek and set up at a large marsh run out. Almost immediately, Maria "knocked the skunk off" with a hungry Seatrout catch. Although we had a few nibbles after that, we moved on over to some docks and fished jigs and shrimp.

Bam! Boom! Pow! Hookup after hookup of keeper sized Black "puppy" Drum. Some were just a tad bit over 14" but some were up close to 18" with most all caught up near the pilings, and many caught out in 12' of water.  These anglers also caught Seatrout and a couple of feisty Redfish, then Maria put a keeper sized 17"  Sheepshead in the boat, to set the bar as 1st place in the Anglers Mark Bragging Rights Tournament-Sheepshead Category (I haven't had any decent Sheepshead this year, so this is the first fish to "go on the board". Scroll down the right side of this report for standings).  Mario followed that up with a Sheepshead catch of his own. Brooke's casting was spot on and it paid off as she landed a good handful of the Drum and Trout. Trey "set the bar" by landing a Drum just
bigger than those earlier caught. We caught fish until we ran out of bait!

After a pit stop at the north end bait shop where we stocked up on mud minnows, we made the short run over to Tiger Island to fish the first of an incoming tide AND to get out of the wind. After only a short time Mario had a good bite, set the hook, and expertly played to the net a 19.5" Flounder. This fish moved Mario into 3rd place in the Anglers Mark 2019 Bragging Rights Tournament-Flounder Category(scroll down the right side of this report for standings)  Boy what a nice fish. We caught a few reds along that stretch, and a good handful of smaller 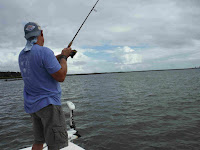 Flounder, until Maria put one more 17" Flounder in the boat. We had a really nice mess of fish so we called it a a day, another great one to be fishing here at Amelia Island, Florida.
Posted by Anglers Mark at 6:04 PM