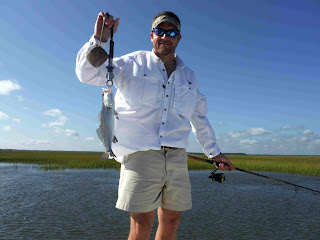 I got a 2nd trip in today with the Blalock fishing team, this time with William and his fishing partner Bryan and we met out at the Goffinsville Park as the sun came up. We headed over to Broward Island and fished the north end...but the tide was still going out so we headed to the south end and this did the trick.  Bryan commented that we had good action right off - catching Seatrout, Redfish, and Flounder. We even had a big one on that was wiley enough to play "possum" until it got under the boat, then it made a dash for the bow, went around the trolling motor and, BAP! fish off! But we fished that area for a while and added another Redfish or two. 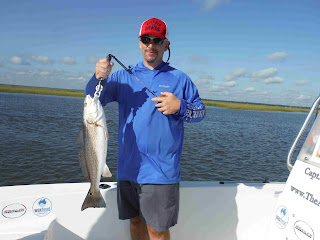 We then came back around to Spanish Drop and fished some flooding oysters, first with jigs, then with float rigs and basically caught Ladyfish, the "poor man's tarpon".

I thought about heading back to Pumkin Hill so I cut across from Spanish to Middle River and started up it but the bank with little grassy islands was looking so good we pulled up and began to work along the shore. Both Bryan and William hooked up and landed Seatrout, then William had a strong hookup and, Fish On!  This one was ripping drag and made it's way up into the marsh grass and sure enough, locked down tight.  But William played it delicately, I backed down towards the grassy, the fish came out and the battle was back on!  William worked it slowly to the boat and landed a nice 25" Slot sized Redfish.  Boy what a battle!

We worked along that bank for a while, picking up another Trout or two, and a hard fighting Jack Crevalle before the water got way up in the grass, and with that, we called it a day, with a new spot in our back pocket, and another great day to be fishing here at Amelia Island, Florida.
Posted by Anglers Mark at 5:57 PM