(Grande) Slam Before the Storm 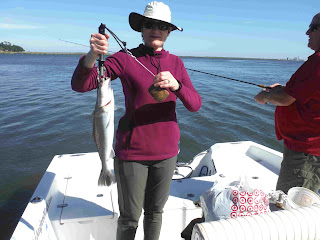 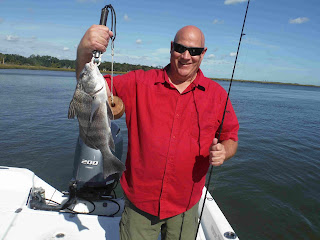 We were luck today to be able to squeeze in a back water fishing trip before the rain and winds hit this afternoon. I had met Jeff and Lori Stuart up at the Dee Dee Bartels Park boat ramp early this morning. We had sunny skies and just a light wind which made for a great morning to get out on the water.

Our first stop was over at the outside of Tiger Island, fishing float rigs and live shrimp and I think it was first cast that we hooked up. Lori reeled in a hungry Seatrout. But we didn't get much after that.  After buzzing thru Tiger and
around to Bell River we set up and again, we picked up a Trout or two, and a Bluefish.

The next stop was at in Lanceford Creek to fish a "grass patch" - Millies Spot to be exact, and again, we caught some small but fun-to-catch Seatrout.  We moved over a seawall, still floating the live shrimp. Jeff was freelining his back around some tree branches and commented that a fish should be there and sure enough, BAM, Fish on!

We moved back to Soap Creek and again, caught a few Trout. Our last stop was back at Eagans Creek, fishing some dock pilings. The oysters were just starting to show on the outgoing tide. We were pitching jigs and shrimp and mud minnows and also drifting a slip float out deeper. A big Trout took that and Lori worked it in to the net -fish in the box! Lori also hooked  up and caught a feisty Redfish. Then Jeff got in on the action after making a perfect cast up between two pilings. His rod bent double and he had a big one on!  Jeff worked it out from the pilings, applied the pressure, and brought to the net a nice keeper sized Black "puppy" Drum. He went back to the same spot and pulled out another one, this one even bigger!  Lori added a Drum to her resume then followed that up with a small Sheepshead to round out her Amelia Island Back Country Grande Slam of Seatrout, Red Drum, Black Drum and Sheephead. We fished until we were out of shrimp then we headed in, counting it as another great day to be fishing here at Amelia Island, Florida. EDIT, Lori and Jeff sent this pic of their catch after it was cooked! Sure looks good! 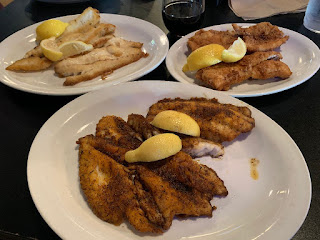