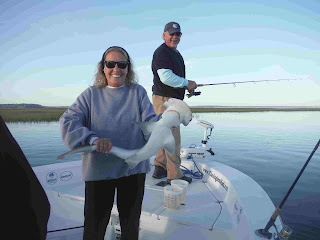 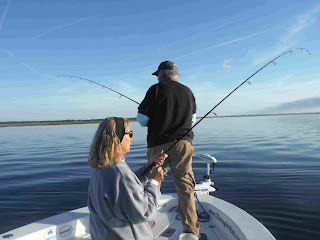 I think it was Sue who had purchased a gift certificate last year for her husband Lewis Welch as a gift and today that redeemed it and what a glorious day did they pick! I met them down at the south end ramp and we then made along run up Middle River and around to Pumpkin Hill to set up at a grassy island with plans to fish float rigs and live shrimp. The duo began to catch Seatrout and it was Fish On! for quite a while. I was a tad bit surprised as we had a high tide and it was still coming in and flooding the grass.

Sue battled a nice 3' Bonnethead Shark to the net and the couple slowly built up a nice mess o'
keeper Trout in the box.  We fished both sides of a grassy pointe and as the tide came to a standstill, the bite fell off to nothing.

So we buzzed back to Seymore's Pointe where Lewis quickly picked up a Seatrout, then Sue drifted her float back a ways and picked up another couple herself.  That died off so we made the short run down to Spanish Drop and began fishing back thru the current and again, the fish turned on. Sue caught and landed a couple of nice Redfish, one of which was of Slot size and both she and Lewis landed more Trout, and a couple of nice sized Bluefish.  I know thru out the trip we had at least two "double hookups".

The temperatures were just right, the fish catching was almost non-stop, so we counted it as another great day to be fishing here at Amelia Island, Florida.
Posted by Anglers Mark at 7:30 PM