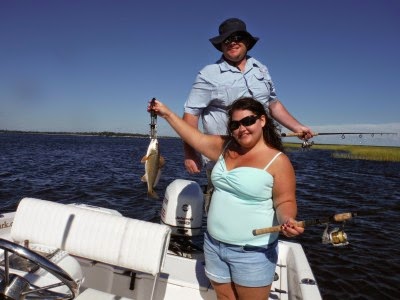 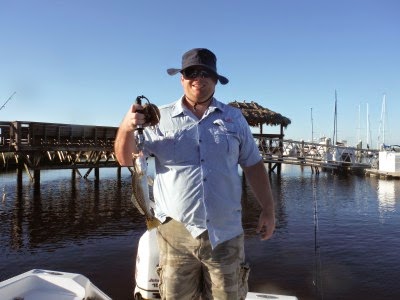 Mary and Patrick Stewart-Hillenburg were visiting Amelia Island this weekend celebrating their new marriage and decided to take in a back country fishing trip and sight seeing tour. The tide was forecast to be high around 3:30pm so we did the tour first, cruising Old Town, the Pogey Plant, Cumberland Island seashore (where we saw a large herd of wild horses) and then we wrapped up the tour by cruising up into Beach Creek on Cumberland where we were
treated to an Osprey sighting.  We then crossed back into Florida and found some flooded oysters to toss float rigs and mud minnows.  It took a little while but then the anglers began to get bites.  Mary put the first fish in the boat, a small but neat Flounder then Patrick followed it up with a feisty Redfish.  We continued to fish that area and both anglers put another Redfish or two in the boat then we moved around behind Tiger Island.  Mary had the hot rod here and landed another Redfish and Flounder.  We then made a run around to Lanceford Creek to fish some dock pilings - and to get out of the wind -and here Patrick had the hot hand.  He picked up a Flounder himself then added a nice Seatrout to round out his very own Amelia Island Back Country Slam of Redfish, Flounder, and Seatrout.  Mary added one more Redfish then we called it a day, another great one to be fishing Amelia Island waters!
Posted by Anglers Mark at 9:16 PM

Thanks for posting the pictures Captain. That was my first charter of any kind and we had a blast. Hopefully, we can come back and do it again. Thank you for getting us on some fish!