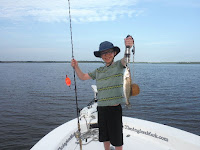 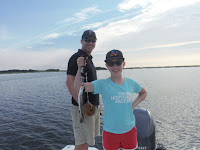 I've always said that summer time fishing "we have to work for 'em" but today proved me wrong! I fished the the Galvin family, Pat and Sharon along with their two kids Kacey and Drew, leaving from the City marina and running up a short ways in the Bell River to fish some flooded oyster beds on an outgoing tide. The anglers were tossing float rigs with live shrimp and mud minnows and it didn't seem to matter because it wasn't long before all of them were catching fish.  It was a good mix of plump Seatrout, high flying 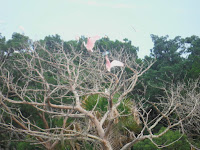 Ladyfish, hard driving Bluefish and some pesky Perch. We fished until it slowed a bit then ran around to the outside of Tiger Island and the fish bite picked up where it had left off. Again, Seatrout, Blues and Ladyfish were the norm. Both Kacey and Drew were making excellent casts and each had the entire variety of fish. After passing some trees with a zoo-like representation of birds, we ran up to Jolley River to fish a large creek runout. Drew tangled briefly with a Bonnethead Shark and again, all four anglers put Seatrout, Blues and Ladyfish in the boat. Sharon had a good bite and a different kind of battle: she played it perfectly and patiently and soon landed a nice feisty Redfish. The sun had gotten up and finally burst through the cloud cover, making it somewhat hot, so we did a short tour of Cumberland Island to see some wild horses, crossed over and took a peak at Fort Clinch, then eased around to check out the Burbank Net Shop and Pippi Longstocking's house. After that, we headed in, counting it as another great day to be fishing here at Amelia Island, Florida. 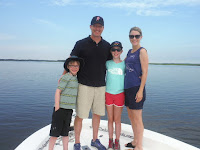