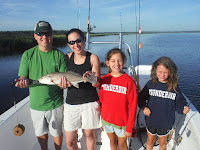 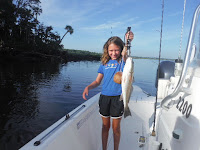 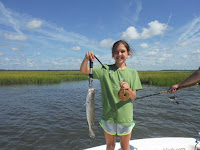 We had a beautiful morning today to be fishing here at Amelia Island, Florida! I had met the Strickland family - Greg and Mandi along with their two girls Sophie and Lydia - down at the Big Talbot Island Park boat ramp and we headed up the Nassau River, running all the way to Broward Island to fish the very first of an incoming tide. In fact, it was just changing as we got there and when it started back in, the fish began to bite (kinda). Greg "knocked the skunk off" when he hooked up and landed a nice Slot Redfish. The bait along the bank was getting busted right and left
by fish and after a while Greg had another hookup, this one stronger, and after a good battle trying to keep the fish out of the logs, Greg was a successful in landing a nice 22" Slot Red. Two Fish. Two Slot Reds. We worked the bank thoroughly and just as we were about to leave Lydia yelled, "I got one!" and her line took off, FISH ON! The Redfish ripped across the water parallel to the bank then went deep, but Lydia held on and fought the fish patiently. After a good battle she landed another Slot Redfish -Three for Three! We ran around to some docks at Seymore's
Pointe, fished for a short while, then cut through Jackstaff to fish the other side of Horsehead. Now the anglers were tossing float rigs as the tide had gotten up. We had a few bites then Greg battled a hard fighting Jack Crevalle. We later eased up in to another creek and here, after much perseverance, Sohia hooked up and landed a nice fat Speckled Seatrout. With that, we called it a day, another great one to be fishing Amelia Island waters.