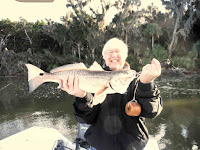 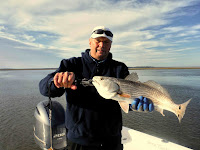 I got to fish again with Bill Lavery and his buddy Joe today, meeting at the Atlantic Seafood dock, a convenient short walk from the Hampton Inn and Suites 50 yards away. It was still somewhat "cool" with the temperatures in the low 40's but we were all bundled up so we ran north to fish Tiger Island with the tide still low but coming in. Both anglers were fishing the jigs and live shrimp and within minutes we were in the fish! Bill hooked up and landed a nice 23" Slot Redfish then both he and Joe were putting
fish in the boat. And they kept getting bigger!  They had a couple of 24" fish, a 25" and 26" fish, lost a few big ones, then Bill fought a nice oversized 28.5" Red to the boat. This kicks off our Anglers Mark 2016 Bragging Rights Tournament with Bill in first place! We worked the bank thoroughly, catching Slot Reds and a good handful of undersized ones, and we also picked up a handful of Seatrout with two of them being of "keeper" size.  Most of the Reds were sent back to get even bigger but we kept count and totaled 9 Slot Reds, 1 oversized Red, and then the handful of smaller Redfish and the Seatrout. The only issue we had was keeping our hands warm!  We fished some flooded oyster beds after that and had zero bites but we all agreed that it was a great day to be fishing here at Amelia Island.
Posted by Anglers Mark at 6:09 PM

Sounds like 1 of those days us fishermen call "Dream days".Nothing new for the Anglers Mark".I love to read these posts.

Sounds awesome. I found this article while searching for "cold Hands fishing" because I'm trying to find places to talk about SpiralTie, a device that makes it so you don't have to take your cold weather gloves off when fishing. Instead, I actually really enjoyed the article. I fish down in South Florida and I absolutely love it down here. But Amelia Island sounds pretty awesome too!