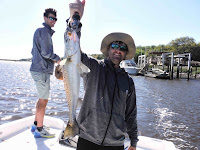 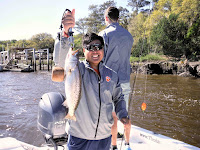 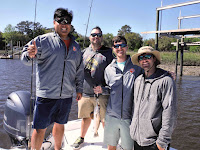 Where did the cold weather come from? Although not frigid, the temperature was down to around 51 when I launched this morning, warranting a vest and fleece jacket for the morning. I was fishing with Dillon Herbert and his friends Eric, Ryan and Ezra who were down enjoying a spring break holiday from their jobs as coaches and teachers. We met at the Atlantic Seafood dock and made our first (cold) run up Lanceford Creek to fish some docks, which happened to be out of the wind. It was ideal conditions and with the
sun getting up, comfortable too...but we had no real bites. We ran back through Lanceford and over to Eagans Creek to fish some dock pilings as the tide changed. The guys fished jig rods until I could get some Cajun float rigs changed over to slip float rigs and this did the trick. Ryan got the hang of it early and put a nice Seatrout in the boat then the others began to get bites. For about an hour and half  these anglers were playing cat and mouse with Trout down deep. Ryan put a big 20.5" Trout in the boat then followed that up with a keeper sized 16" one. Then Ezra hooked up with one,
played it patiently, and soon landed a nice 19" Trout.  He picked up another 17" Trout along the way. Dillon had one of the big ones hooked up that ripped drag and broke the 14# test leader! With time running out, Eric got on the board with a keeper sized Trout landed. The sun had warmed things up nicely and the fishing had picked up too, so we counted it as another great day to be fishing Amelia Island, Florida.
Posted by Anglers Mark at 8:42 PM