First on a Fly 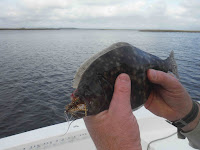 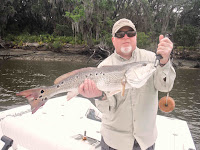 There was a fog warning this morning on the radio but when we launched it was cloudy but not fog. The wind was forecast to pick up so when I met Mark Deprimo we planned to hit Eagans Creek with a fly rod in hopes of picking up a Seatrout down deep and be out of the wind. Mark was making excellent casts and stripping the fly back slowly, letting it fall down the river bottom, but we had no hits. When the tide  hit rock bottom we ran around to Tiger Island and began to fish the exposed logs as the tide started back in. Mark made a pinpoint cast to the edge of some logs and as his fly slipped
along he felt a thump and a heaviness and, FISH ON!  He worked the small but feisty fish to the boat and put his first fly caught Flounder in the boat. We fished up and down the island, staying out of the now brisk wind, but had no real bites. On our third pass we switched to live shrimp and spin gear and this did the trick. We had a strange and subtle "bump" out from the limbs and immediately knew that this was a big fish. Mark played it perfectly and when the fish took him from bow to stern and from port to starboard, he stayed with it, keeping the pressure on. After a good battle, Mark landed an exhausted 29.75" oversized Redfish, putting him in first place of the Anglers Mark 2016 Bragging Rights Tournament -Redfish category (scroll down right side of this report for standings). Boy what a fish. And it had 25 spots on it which would have made some one very happy to be fishing in the recent Spot Tournament -IF it had been caught about a year or two ago! After fishing the island we ran around to Bell River, fished some still exposes oysters, and Mark picked up a feisty Bluefish and Spotted Seatrout to round out an Amelia Island Back Country Slam of Flounder, Redfish, and Trout. With that, we called it a day, another great one to be fishing here at Amelia Island, Florida.
Posted by Anglers Mark at 5:19 PM