Call It A Bull Red. On Light Tackle. 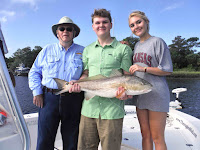 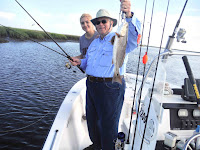 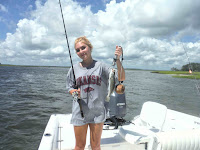 I fished again with Doug Mackle, who treated his grandkids Sebastion and Montana to a morning of fishing on The Anglers Mark. We met down at the City marina and ran up to Eagans Creek to fish some dock pilings on the last of an outgoing tide. We has some live shrimp today and started off with jigs, fished slowly on the bottom. It didn't take long before both of the young anglers had a hookup and FISH-S ON!  And after a couple of massive runs, FISH OFF! Now that was a wake up call! We continued to fish and
had another hookup, this one not so big, and Montana reeled in a feisty Black "puppy" Drum. We bounced up and down the docks and when the tide started back in, Doug picked up a small but hard tugging Redfish. Then Sebastion had a good hookup. He played the fish patiently and after a good battle put a Slot 21" Redfish in the boat. Then Doug found one too, another Slot Redfish. And then BOOM! Big Fish ON! Sebastion was on the rod and boy this was a big fish! He fought the fish valiantly, from shallow water to deep water. From port to starboard and from stern to bow. The big fish
ran deep and stayed deep but as Sebastion applied the pressure we saw a big Red roll up and knew that this was a massive fish. After an extended battle, he landed a big 34.25" Redfish, moving him well in to first place in the Anglers Mark 2016 Bragging Rights Tournament - Redfish Category (scroll down the right side of this report for standings). We continued to fish and Montana began to establish herself as the "variety of fish" catcher. She landed another Black Drum and then a Shark or two. At our next stop we picked up a big Bonnethead Shark and Montana put a Ladyfish in the boat. And at the nest stop she found both a Bluefish and a Seatrout to round out the anglers Amelia Island Back Country Slam of Redfish, Black Drum and Seatrout. After one more stop  we called it a day, another great one to be fishing here at Amelia Island, Florida.
Posted by Anglers Mark at 5:47 PM