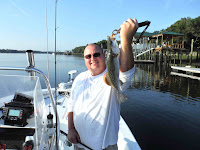 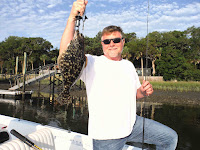 Charles Land and his friend Mike drove down late last night for an early morning fishing trip and we all were greeted with a beautiful day to wind down and get some fishing in here at Amelia Island. I met them at the City dock and we headed over to Eagans Creek to fish the last couple of hours of an outgoing tide. It didn't take long before Mike "knocked the skunk off" when he hooked up and landed a keeper sized Seatrout. The two anglers had some good bites for a good while, landing another Trout or two then Charles had a strange bite up near some oysters. This was a nice fish and
Charles kept the pressure on, working it patiently to the boat - and landed a keeper sized 18.25" Flounder, a big enough fish to move him into first place in the Anglers Mark 2016 Bragging Rights Tournament -Flounder Category (scroll down the right side of this report for standings).  Mike had an even bigger bite up under some pilings but there was no stopping this fish - it went through the pilings and broke itself off - it didn't get big by being stupid! We worked an oyster lined bank and Mike picked up another keeper sized Trout then he found a keeper sized Flounder of his own.  Our next stop was over at Tiger Island and within minutes of fishing Mike found a feisty 3-spot Redfish to round out the duo's Amelia Island Back Country Slam and they also reeled in a small Black "puppy" Drum to make it a "grande" Slam! Our final stop was up at Jolley River and here they tangled with some large Ladyfish, the poor man's Tarpon. Charles put one more Trout in the boat then we called it a day, another great one to be fishing here at Amelia Island, Florida.
Posted by Anglers Mark at 5:54 PM