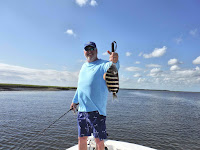 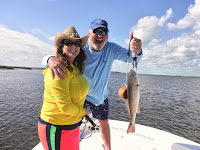 I had the pleasure of fishing again with Dale and Kay Bullard, meeting them down at the Big Talbot Island Park boat ramp early this morning. After a brief safety orientation, we headed up the intercoastal waterway to dip into Jackstaff Creek. The two anglers were tossing jigs and mud minnows to the exposed oysters on the last of an outgoing tide and had some good, strong bites. Both Kay and Dale had fish at the boat and both were good sized, but they threw the hook. We fished one bank then a sandbar and did "knock the skunk off" with a fat Seatrout. We ran through Horsehead and
over to Bubblegum Reef, fished it thoroughly, but only had a slimy Catfish. We motored north for a 100 yards and began pitching to the oysters and this did the trick. Dale had a strong hookup, played it patiently, and soon landed a keeper sized Sheepshead. And shortly after that he put a feisty Redfish in the boat. Going back to the same cut in the oysters, Dale had another big bite, and a bigger fish. He worked the big fish to the boat and kept he pressure on and soon landed a keeper sized Slot Redfish. We worked that bank then ran down to Broward Island to fish the incoming tide, which is usually the best. But the wind was coming right down alongside the island and kicking up mud along the bank and we had no bites. We made our last stop at Seymore's Pointe and "played chess" with the Mangrove Snapper, catching a good handful to round out an always fun trip fishing with the Bullards here at Amelia Island, Florida.