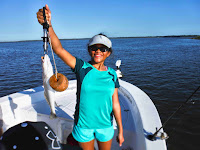 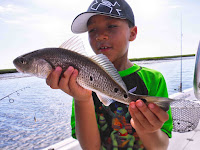 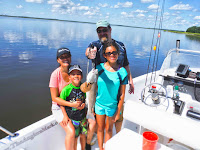 We fished the south end again today where I met Michele and Robert Huffman and their kids Ashlyn and Jackson. Leaving the Sawpit Creek boat ramp, we made a short run up the Nassau River and made a stop at a marshy pointe on the very last of an outgoing tide. Robert and the kids were tossing jigs with minnows up current and letting them bounce down the river bottom and were getting plenty of bites, but no takers. But they continued to fish and soon Ashlyn's fishing rod heated up and she started landing fish. She "knocked the skunk off" when she put a hungry Seatrout in the boat
then she really focused and landed a couple of more. Jackson caught one of the Trout before we moved down to another point and here things really heated up. All three of the anglers were catching fish while Michele and I kept them baited. They caught a couple of keeper sized Seatrout and a good handful of feisty Redfish and two really hard fighting Jack Crevalle. As the day ended we realized that Ashlyn had caught the most fish, Jackson had caught a Redfish with the most spots (10), Michele was voted "Best First Mate", and with his last cast, Robert hooked up, played patiently, and landed the biggest fish of the day, a nice 22" Slot sized Redfish! Now that's the way to wrap up a great day of fishing here at Amelia Island, Florida!
Posted by Anglers Mark at 5:20 PM