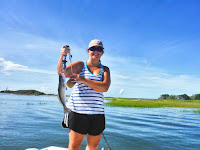 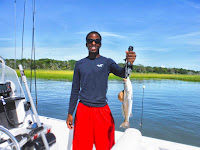 We had another beautiful morning today when met Heather Floyd who had with here Josh and Larry, with plans to fish the last few hours of an incoming tide. We made our first and longest run up the Bell River and fished some docks pilings with jigs and mud minnows. I believe it was Larry's first cast along the outside of a dock when he had a hookup! He worked the fish patiently to the boat and landed a nice Seatrout. Now that's the way to start out a fishing trip! We continued to fish the area and a little later Heather
had a good bite and a strong pull. I was thinking "slot Redfish" because it was fighting and staying deep. She worked it up from the bottom and we saw that it was a big Catfish, fun to catch but not so good to eat! Josh followed that up with a small Mangrove Snapper that he got to the surface. We ran around to the Jolley River and fished a couple of flooded grass lines with no real luck. Our next stop was on the outside of Tiger Island. We were getting some good bites - Heather picked up another Snapper and a Seatrout, Larry added another Trout then a nice keeper sized Trout, and Josh wrapped things up with a keeper sized Mangrove Snapper. With that, we called it a day, another great one to be fishing here at Amelia Island, Florida.