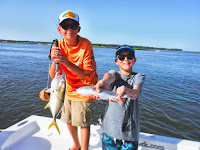 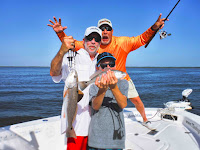 Another beautiful morning greeted us today, and I was fishing with Robert Gibson, his buddy Rick and their grandsons Ashton and Luke. We met down at the Big Talbot Island Park boat ramp and made the run up the Nassau River. Today, the tide was still fairly high and I thought about going straight to Twin Creeks, but I just couldn't pass up the "hot spot" that had been doing us so well the last couple of weeks! So we pulled in and began tossing mud minnows up to the shoreline and fishing them back slowly. Even
though these anglers were getting bites it took a while to get a taker but after that, it was non stop catching for almost 3  hours!  Both Luke and Ashton had strong hookups and battles with hard fighting Jack Crevalle, all four of the fishermen put Redfish after Redfish after feisty Redfish in the boat and every once in a while they'd land a hungry Seatrout. Then they caught 3 or 4 Flounder to round out a handful of "Amelia Island Back Country Slams".  Luke started out with the "hot" rod then Robert pressed  him with some outstanding fish catching runs of his own. Ashton methodically put fish in the boat then Rick had a strong hookup and patiently played to the boat a nice Slot Sized Redfish. We bounced up and down the bank, catching fish at will, moved further West and picked up a few more, and wrapped the day up with a nice keeper sized Trout. It was a great morning of friendly banner and a great day to be fishing here at Amelia Island, Florida.
Posted by Anglers Mark at 6:01 PM