Nice Fish All Around 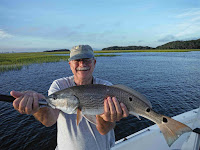 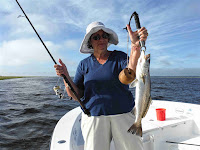 I had the pleasure of fishing with Rob and Elizabeth Torregrossa again today, and after I met them down at the City marina, we made a run north to fish the outside of Tiger Island on the very first of an incoming tide. The two anglers were tossing mud minnows under float rigs and it wasn't long before they began to get fish. Elizabeth put a couple of hungry Seatrout in the boat and Rob hooked up a Needlefish, then battled with a hard fighting Blue. When he had a another strong bite in the same spot we thought for sure it was another Blue, but this one was ripping drag! I then thought his drag
might be too loose...but luckily Rob could feel that it was a big fish! He played it patiently and landed a nice 22" Slot Redfish! They picked up another Trout or two then we headed around to the Jolley River. After one brief stop on the way to fish a marsh run out, we turned the corner and set up fishing the "bank". Within minutes Elizabeth had a good bite. She kept the pressure on and landed a big 20" Seatrout! Rob immediately followed that up with a keeper sized Black Drum (all fish were released today) before we moved on further up the river to fish Snook Creek. Again, Rob landed two more Redfish. Our last stop was back at Tiger Island and we wrapped up the day by catching one Flounder to round out an Amelia Island Grande Slam of Redfish, Seatrout, Black Drum and Flounder. It was another great day to be fishing here at Amelia Island, Florida.
Posted by Anglers Mark at 5:24 PM