Squeezing in a Late Afternoon Trip 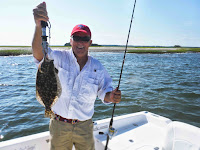 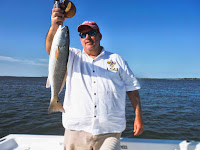 I fished yesterday afternoon, too, meeting Dale Steinkamp and his friend Graeme down at the City marina at 3pm with plans to fish into late evening. We had both live shrimp and mud minnows as bait when we headed north up to the outside of Tiger Island. Both anglers were making excellent casts and getting nibbles here and there, but we had no takers for awhile until Graeme landed a hungry Seatrout. We pulled up and ran up to Jolley River and fished the "bank". Again we had some bites then Dale began to put his rig up into a large run out and caught a few Seatrout. We also had a small
Flounder along the way. We bumped around and fished the outside of Jolley and here things picked up. Graeme reeled in a nice keeper sized Flounder then Dale put one in the boat, too, then he had a strong hookup - a bigger fish! This fish fight brought Dale from the bow back to the stern and from starboard to port as it ripped the drag but Dale played it perfectly and eventually landed a nice Slot sized Redfish. The caught another Flounder or two and Graeme put a nice feisty Redfish in the boat before we moved on to our last stop, behind Tiger Island. The fish bite wasn't on fire, even though the tide was getting right, but we did have two nice fish caught - a large 19" Flounder(which put Dale tied for 2nd place in the Anglers Mark Bragging Rights Tournament 2016 -Flounder Category. Scroll down the right side of this report for standings) and a nice 18" Trout - a good way to wrap up a great day of fishing here at Amelia Island, Florida.
Posted by Anglers Mark at 8:40 AM