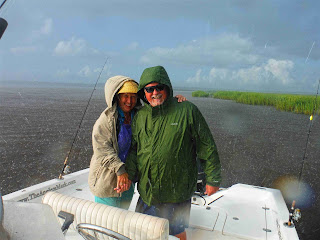 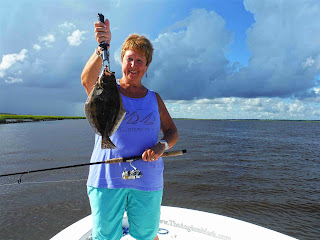 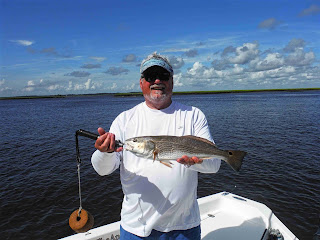 I give up on the weather reporting!  We've had a week or so where rain was forecasted in the  morning and it was beautiful, then today there was only a slight chance and we got soaked! But Bob and Jana Pharmer were up for fishing so we did just that, even though we did it in some wet clothes!

I had met them up at the Dee Dee Bartels Park and we made the short trip around to the outside of Tiger and set up fishing a large creek mouth, tossing float rigs with mud minnows up current on the high and outgoing tide. I think it was
Bob's first or second cast and he had hooked up with a feisty Redfish. We worked along the bank and both he and Jana landed some fat Seatrout and another Redfish.

We then ran out and around and up to the Jolley River and we could see the rain coming from Cumberland. I hoped that if I ran far enough up in to Jolley it would pass us by, but nope, it came right over the top of us. We had just put another Red in the boat when we had to suspend fishing for just a few minutes, it was such a downpour. But once it passed the rainbows came out and we were fishing again. Unfortunately the water was
now real muddy and the fish quit biting!

After running back to the mouth of Jolley we fished the "bank" and kept chipping away at a good day of catching. Bob put another Red in the boat and Jana landed a nice keeper sized Flounder (all fish caught today were released). We also tangled with a couple of Ladyfish.

Our next stop was back at Tiger, fishing jigs on the bottom with the minnows. Fairly quickly Jana put her second Flounder in the boat and as we worked back and forth down the bank we felt sure there was big fish to be had. We then saw a fish bust bait up near a stump and after Bob made a perfect cast to the spot, he felt the "bump" and, UMPH! Fish On!  Bob couldn't have played the fish any better than he did - working it out deep slowly then patiently letting it wear itself out. After a good battle he landed a nice Slot Sized Redfish. Now that's the way to wrap up another great day of fishing here at Amelia Island, Florida.
Posted by Anglers Mark at 5:44 PM