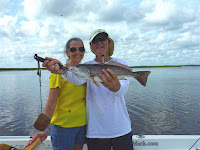 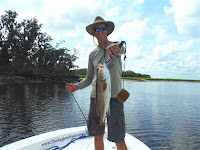 We had a crazy day today...I had to pick up bait from Browns Creek on Heckshire early this morning which put me running late to the boat ramp to meet Don Frank and his sister Mary and brother-in-law Larry.  And when we made it over to the outside of Tiger and broke out the float rigs we found that the live shrimp were super small and so soft they'd hardly stay on the hook. But these anglers were up to the task and  were glad to be out on the water and it paid off.

Mary "knocked the skunk off" when she reeled in a hungry Seatrout
at the stern of the boat, but even though we had some nibbles (actually a whole bunch of them) we didn't get many fish at that first spot.

After running around and up to the Jolley River and setting up at Snook Creek, the trio began to catch small but feisty Redfish with a Trout here and there. We had a real good flurry of catching but low and behold, we had already blown thru most of our shrimp in just 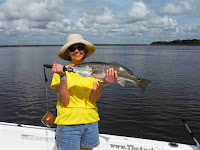 and hour and a half of fishing! We dropped back to the mouth of the Jolley, cast netted some mullet and then worked that bank. John landed a Trout on one of the mullet, then we tried some FishBite material and he landed a feisty Redfish on that.  After that, things fell off to almost no bites at all.

But the tide was getting way down so we buzzed around to Tiger and switched to jigs and worked the bank. I was able to cast net some smaller mullet (finger mullet) and as we worked our way back Larry had a tremendous bite and, Fish ON!  He played it perfectly and soon landed a nice Slot sized Redfish. We had fallen off the bank and after I got us closer Larry had another strong bite and he put another Slot Red in the boat.  I think he got one more then Don got in on the action. He had a good hookup and BOOM! Big fish on! He played it patiently and landed his first Slot Red, then he went back and got another Slot Red.

Then it was Mary's turn. Another Slot Red was on the line and she expertly worked it to the net and put the final fish in the boat. These anglers had limited out on Redfish, the first time I've had that happen in a while, so we called it a day, another great one to be fishing here at Amelia Island, Florida.
Posted by Anglers Mark at 9:00 PM