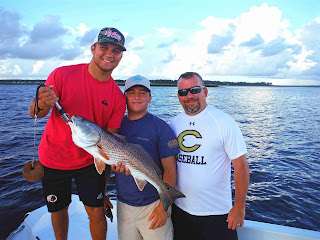 I had met the Noble's - John and his two sons Christian and Conner out at the Goffinsville Park boatramp this morning and we made a short run down the Nassau River to the Spanish Drop area and set up fishing an outgoing tide with jigs and live shrimp. All three anglers were making excellent casts to the exposed oysters but all we were getting were nibbles for a good 20 minutes then, BOOM! Christian had a fish pick up his bait and start off and when he set the hook, the drag began to rip, Big Fish On!  When it headed for deep water right off I made the mistake of declaring it a Bonnethead Shark - we'd seen a few cruising the shoreline - and I stuck with that 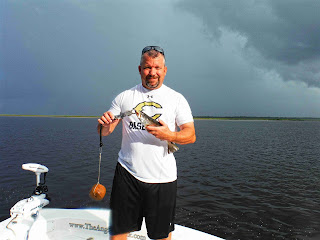 assertion all thru the battle, right up until it came to the surface and we saw that it was a huge Redfish!  Christian played it perfectly and we eventually netted a 29.5" Oversized Redfish. After quick pictures it was allowed to catch it's breath over the side and swam off with and indignant swish.

From then on all three anglers began catching fish - small, but feisty Redfish and hungry Seatrout, and we fished it right up until a huge rainstorm ran us west!  We buzzed down to Broward thinking we could bypass the rain, but it was to no avail - we got wet! But the fishing made up for it. We fished the south end of the island and Conner got hot, catching one Redfish after the other. As we worked our way down the island John figured it out and began to pick up fish out deep, fishing his jig slowly. When we got to the northern end of the island the tide had started in and her Christian picked up where he had left off. He and Conner landed a couple of Redfish then Conner caught and landed a nice Slot Red. We also added a keeper sized Seatrout along the way. After a good battle with another huge Red, one that won the battle, we fished on down the Nassau for just a bit before making one final run.

That was to Twin Creeks and although we didn't get much, Conner capped the Amelia Island Grand Slam when he picked up a Flounder on a float rig. Even though we got wet, it turned out to be another great day of fishing here at Amelia Island, Florida.
Posted by Anglers Mark at 7:09 PM