The Rain Put the Fire Out 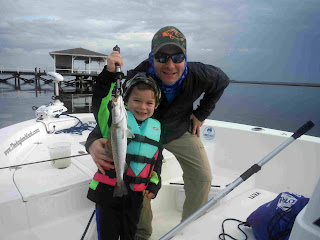 I fished with three generations today - Bruce Byrd, his son Mark and grandson Jace, meeting them out at the Goffinsville Park boat ramp early with plans to run over to Horsehead and fish the first of an outgoing tide. We set up along a marsh line and began tossing float rigs and live shrimp and it wasn't long before we were catching fish. Last week's struggles were a distant memory!

Mark got hot early and began to hookup with Trout and then he began to share the rod with young Jace. But Jace soon found that he could be in all the action if he ran the catch net so he landed both his dad and grandad's fish from then 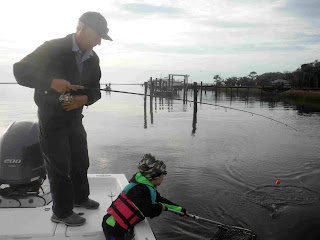 on out. Bruce had just made a good cast up close to the marsh grass and when his float slowly went under he tightened the line, let the circle hook set itself and Fish On!  Bruce worked the fish patiently to the boat and landed a nice 20" Slot Redfish. We picked up a couple of more fish then moved on down the Nassau.

We fished 2-4 marsh run outs with float rigs and jigs and caught one or two fish then as we were fishing Seymore's Pointe it began to rain then we had some lighting so we buzzed back to Goffinsville and let the storm cell pass. We thought we'd get some more fishing in so we bounced down to Pumpkin Hill, had one good bite, then the bottom fell out so we called it a day. Although the rain got us wet, we still had a great morning out on the water here at Amelia Island, Florida.
Posted by Anglers Mark at 7:00 PM

They still dredging buy the fort?