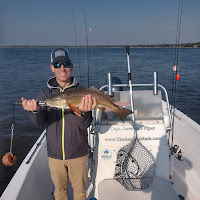 You may have noticed that I haven't "reported" in a while!  Many of you know that my wife and I are building a small "cottage" downtown Fernandina Beach and we're in the last few months of getting it finished. I've been burning the candle at both ends - fishing, installing doors and trim molding and painting and installing flooring and....getting up and doing it all over again!  Needless to say, my "reports" have slipped. Once we get a CO on the house I'll be able to take a breather and will get back to reporting every trip.

But today's trip warranted  a report! I fished with Steele Clayton, meeting him down at the Sawpit Creek boat ramp early on a high 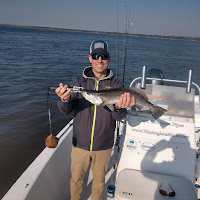 and incoming tide. We ran up the Nassau River and fished between some docks, tossing float rigs with live shrimp up near the flooding marsh grass. It took a minute or two, but when the bite started it didn't stop for over an hour. Steele landed Trout after Trout with most being undersized but eventually he landed a few "keeper"sized ones (all fish caught today were released).  Then he had one that was right at 20" which made for a good fight.  He also landed a nice 18" Black "puppy" Drum in that area.

We moved around the corner and fished another stretch and just when I thought it was all for naught, BOOM! Fish On! You can always tell when it's a big one when it dives deep, rips drag, and 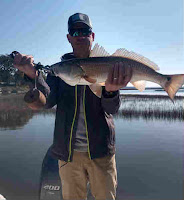 doesn't want to budge. Steele played it expertly - you can also tell when you've got an experienced angler on the boat - he worked it slowly in, giving it some line when it wanted it, and soon landed a thick 24" Slot Redfish. We had no more than taken pictures, released the fish, and went back to drifting a shrimp when, BOOM! Big Fish On! I saw it roll and knew right off it was a big Trout. Steel worked it to the boat and landed a nice 23" Seatrout, boy what a fish.  This fish placed Steele in first place in the 2019 Anglers Mark Bragging Rights Tournament - Seatrout Category(scroll down the right side of this report for standings)  Those were the only two fish we got at that spot!

Our next stop was down at Christopher Creek, now fishing jigs and shrimp. We worked a long stretch and picked up one fish. But boy was it a good one! Steele said he felt the fish take his bait, he tighted up and let the hook set itself. After a good battle, the fish was in the net and measured at 26" - another Slot Redfish. This fish placed Steele tied for 2nd place in the Anglers Mark 2019 Bragging Rights Tournament-Redfish Category.

We fished Pumkin Hill later but the tide was up really high and we had not a single bite so we called it a day, another great one to be fishing here at Amelia Island, Florida.
Posted by Anglers Mark at 7:00 PM