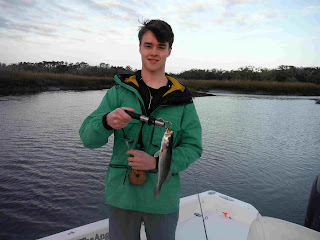 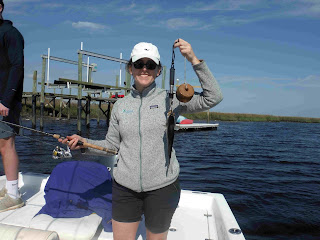 Wow! What a pretty day we had out on the water today! It was all sunshine, no clouds, and only a
slight breeze (to begin with) with I met Jay Michaud, his wife Courtney and their son Ben up at the Dee Dee Bartels Park boat ramp.  We came south to Soap Creek and set up along some marsh grass on an outgoing tide that had an hour or so to go to hit bottom.

We had no more than got our live shrimp under float rigs out when Ben had a hookup and knocked the skunk off with a nice Seatrout catch. He went back to the same area and BOOM! Another trout catch.  We worked that entire bank but had no more bites after that.

Our next stop was over at some docks in Lanceford Creek and here we had some serious hookups! Courtney was tossing a live shrimp on a jig and when a big fish hit she set the hook and the battle was on!  But this fish must have been around for a while and found it's way into the dock pilings and BAP! Fish Off. Courtney had another good bite that fought for a while then threw the hook and later, Jay had the same.

We then ran to Tiger Island to fish the first of the incoming tide and although the conditions were absolutely perfect, we had no real bites, other than a couple of perch that Courtney landed (and the amount is still being debated). After fishing Jolley River briefly, we found that the wind was causing difficulties, so we continued on around to Bell River. Here, Ben caught another Trout on a jig and Courtney picked up a couple of 14" Seatrout (or were they 16"?) on a slip float rig.

The day stayed nice, we caught some fish, so we counted it as another great one to be fishing here at Amelia Island, Florida.
Posted by Anglers Mark at 6:30 PM