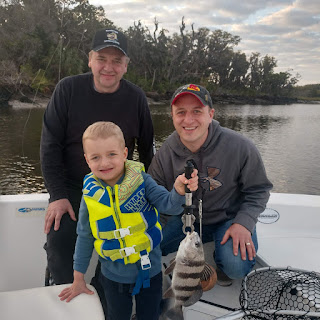 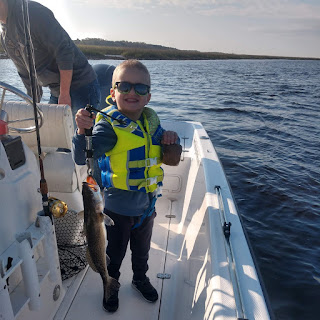 Every once in a while I get a person on the boat that has the "Anglers Mark". Today it was a 4-1/2 year old young angler named Luke.  Last night his dad Steve said he was chomping at the bit to go fishing and that he lived and breathed fishing. I met them and Grandad (Ja Ja) up at the Dee Dee Bartels Park boat ramp and after our brief safety orientation, we headed over to Tiger Island to fish the logs on the very first of an incoming tide.

Luke was ready to go and was quickly casting his own spinning gear rigged with jigs and live shrimp and sure enough, he was the one that "knocked the skunk off" when he hooked up and landed a feisty Black "puppy" Drum.  He then reeled in a hungry Seatrout. We had to deal with
the "baitstealers" and sand gnats for a bit but Luke was able to land one more drum before we  moved on.

Our next stop was up at Jolley Bank. We may have caught a small trout or two but as Luke drifted a float rig along the exposed oysters his rod bent and the drag began to sing, FISH ON!  Luke fought the fish mightily and after a good battle and landed a big 20.5" Seatrout!  I was trying to think of an exclamation when Luke nailed it with "Holy Chalupa"! Boy what a fish!

We fished the outside of Tiger and landed a couple of more Trout then ended up over in Bell River where we had some good bites but no takers. It was an outstanding day to introduce a young angler to the backwaters of Amelia Island.
Posted by Anglers Mark at 7:50 PM