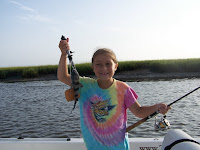 The John Fagan family was in town, visiting from Mississippi, and took in an Amelia Island backcountry fishing trip. We met up at the south end boat ramp this morning and headed up the Intercoastal, making a brief stop at the Longpointe docks to pitch some mudminnows to the pilings on the last of an outgoing tide. We had no bites so we cruised up to the mouth of Jackstaff and anchored just eastof a runout. John's wife, Nancy and youngest daughter Baileigh had the hot rods early, boating Redfish, Drum, Trout and hard fighting, hard pulling Jack. Ashleigh joined in on the action, catching a Redfish and then Bonnethead shark. 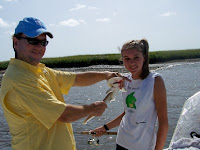 We moved across the creek to fish a sandbar point where John hooked up and brought to the net a nice, fat, keeper sized Trout. 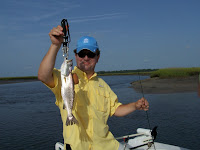 We ran around to Nassau River, anchoring at a runout on the first of the incomiing tide and everyone joined in to catch Redfish. Baileigh added to the "species caught" list by catching the "poor man's Tarpon" - a Ladyfish. She also pulled in a Bluecrab which we promptly cut up for bait. 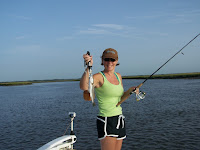 It wasn't long before drag was being ripped off the reel of the crab baited rig! John fought the fish expertly and eventually brought the 4' Bonnethead to the boat for veiwing, then we broke it off to be caught another day. One more stop produced a few more Reds with John pulling in the biggest for the day, another great one to be out on the water!
Posted by Anglers Mark at 9:55 PM