Fishing Got Hot This Afternoon 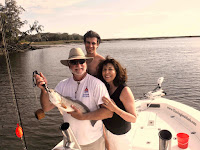 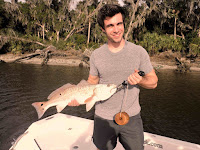 I fished a 2nd trip this afternoon, this time with Mark and Nilda Laurint and their son Brent. We left the City marina and headed up Lanceford Creek to fish some dock pilings with the tide going out. Fishing with jigs and live shrimp, Brent "knocked the skunk off" real fast when he landed a nice feisty Redfish. Then Mark found a keeper sized Flounder over by some submerged oysters. There were some guys fishing on the dock and that had two strong hookups while we there but both fish broke off, OUCH!  We had some nibbles here and there but no more takers so we ran around to Bell
River to fish some more dock structure. Fish catching heated up! Mark was putting Seatrout in the boat at the stern while Brent was catching them at the bow. Although many were small, they managed to put 2-3 keepers in the boat. Then Mark put his bait up near a piling and BOOM, FISH ON! He worked this bigger fish out from the dock and landed a nice Slot sized Redfish. Brent switched to a slip float, a typical Trout rig, and he picked up a few Trout with that technique. We ran around to fish Tiger Island on the last of the outgoing tide. Mark pulled a couple of feisty Redfish out from a pocket then he had a strong bite - this was a big fish. Mark played it patiently and worked it to the boat so that we could net a 24" Slot Redfish. The trip picked up a few more keeper Trout then Nilda placed a perfect cast right up beside a log, and FISH ON! This too was a big fish. She kept the pressure on and valiantly fought and subdued the fish and we netted a "tournament sized" 26.75" Redfish, which placed Nilda in third place in the 2016 Anglers Mark Bragging Rights Tournament (scroll down the right side of this report for standings). We fished the area for a while longer then headed in, counting it as another outstanding day to be fishing Amelia Island waters.
Posted by Anglers Mark at 10:06 PM