Fishing Heats Up With the Morning Temperature 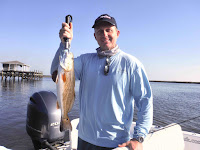 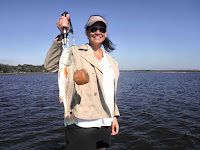 I fished the south end today, meeting Chris and Teresa Gohlke down at the Big Talbot Island Park boat ramp. We had an outgoing tide so I made the run around to Broward Island to fish the bottom of the tide. The two anglers were tossing live shrimp and  mud minnows and making excellent casts but we had no real bites other than the ever present "baitstealers". We ran back to Seymore's Pointe, fished a dock on its east side, then the west, and finally Teresa "knocked the skunk off" when she landed a hungry Seatrout. We eased back to another dock and here things heated up. Teresa
landed a feisty Redfish then Chris got into the action when he had a strong hookup. He played the fish patiently and soon landed a nice 19" slot sized Redfish. Shortly after that he tossed up near a piling and almost immediately had a bite and FISH ON! He worked the fish away from the piling and brought it to the boat - a keeper sized Sheepshead!  These two anglers had tallied an Amelia Island Back Country Slam.  But they were not finished. After they teamed up to get another Red or two, Teresa had a good bite and landed small (but hard fighting) Black "puppy" Drum to make it a "Grande Slam".  We ran over to fish Bubblegum Reef, had no bites down deep, then began drifting float rigs over near an old oyster bed. Chris picked up a Trout so we switched Teresa to a float rig and then both were getting bites and fish. They caught a good handful of Trout and a couple of Blue fish to round  out another great day of fishing here at Amelia Island, Florida.
Posted by Anglers Mark at 9:07 PM