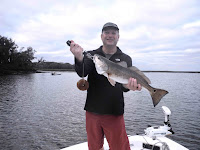 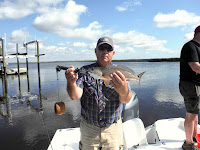 At least we can say that!  I had met Chris Pyle and his longtime friends John and Byron down at the City marina and we made our first run up to Tiger Island to fish the downed logs as the tide started back in. We had only fished for about 30 minutes when John had a strong hookup. He said he thought he was hung on a log at first but when it started pulling back he knew he had a big fish!  He played it perfectly and after a few good runs, he landed a nice 24" slot sized Redfish. Another angler was fishing ahead of us and
catching Trout on a slip float but we had no more luck (other than pesky baitstealing bites) so we made a run around to Lanceford Creek to fish some dock pilings (and to get out of the increasing wind). The conditions were perfect but I don't believe we got a real bite. We fished Oyster Bay and here Chris landed a small Black "puppy" Drum but there were no other takers. The baitstealing yellow tail perch were robbing us blind so we ran over to Eagans Creek and stocked up on some mud minnows before heading up Bell River to fish the docks, and again be out of the wind. Things heated up somewhat with a handful of Seatrout caught then Byron put the last fish in the boat, a nice feisty Redfish. We fished a couple of spots in Jolley River but the wind was really whipping us so we called it a day, another great one to be out on the water at Amelia Island.
Posted by Anglers Mark at 8:46 PM