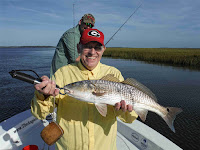 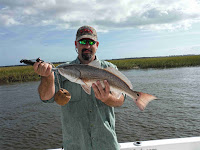 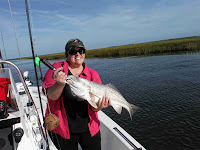 I fished with the Blalock's again today, Dara and William and Bob, meeting them down at the Big Talbot Island Park boat ramp early. Bob wasn't able to make it yesterday and after hearing about the great catches that Dara and William had,  he (and I) thought that it would be difficult to have two days in a row of good fishing. But wrong we were! You know it's a pretty good day when you debate amongst your selves "did we catch 50 fish? 60 fish? 70 fish?".  All I know is that we went through about 12 dozen's of bait and much of
that was used catching fish. We had run up the Nassau River and stopped at Twin Creeks right at the peak of high tide. It took a few minutes, but then the anglers began to put some Trout in the boat. William added a small but feisty Redfish to the catch. It seemed the fish started biting right when the tide changed. Although it was fun catching small Trout, we decided to move down the river to another marsh run out and here things really heated up. They caught a few more small Trout then began to pickup some keeper sized ones as we trolled along the bank. As we got to some submerged oysters,
BOOM! Redfish began to bite. They caught small ones, medium ones an big Slot sized fish. We had double hookups and Triple hookups. Just when you thought that there were no more big ones, there would be a strong ripping of one of the anglers drag and, Big Fish On! It eventually slowed so we moved up the river a short distance and got into some more fish. They added a handful of Flounder, a couple of small Black "puppy" Drum, and a couple of Stingrays. It was a great day of fishing and this one will be hard to duplicate!
Posted by Anglers Mark at 10:04 PM