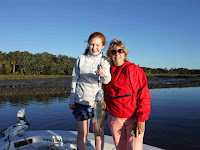 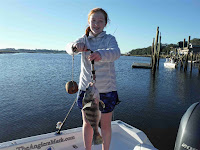 I fished yesterday morning with Debbie Corbett and her granddaughter Sidney. I picked them up early up at the Eagans Creek boat ramp and it was our first real cool day and my first for wearing jeans after a long spring and summer in shorts! We had a little bit of wind so we decided to fish some docks in Eagans and that turned out to be the right move.  I had a bait well full of live shrimp and mud minnows and for the first time in a while, the shrimp seemed to be the better bait. The two anglers were making
excellent casts with their jig rods and within minutes they were catching fish.  Sidney "knocked the skunk off" with the first catch, a nice feisty Redfish which she patiently worked to the boat. From then on and for about 2 hours were catching fishing. Debbie was fishing out of the stern port side while Sidney fished from the stern starboard side. We had one or two fish take the hook and run up into the dock pilings and break themselves out but finally Sidney had a strong hookup and, FISH ON! She applied some pressure away from the pilings and got the fish out to deeper water. This fish was digging deep and pulling hard but Sidney was up to the challenge and eventually landed a nice keeper sized 18" Black "puppy" Drum. And just a short time later Debbie did the same, fighting and landing another 17" Puppy Drum. We fished and caught until they quit biting, winning some and losing some then we ran further up the creek to try some float rigs around some flooding oysters. We had no real bites there so we ran out and over to Bell River and stuck with the float rigs. Sidney put one more Redfish in the boat here. And with that, we called it a day, another great one to be fishing here at Amelia Island, Florida.
Posted by Anglers Mark at 7:56 PM